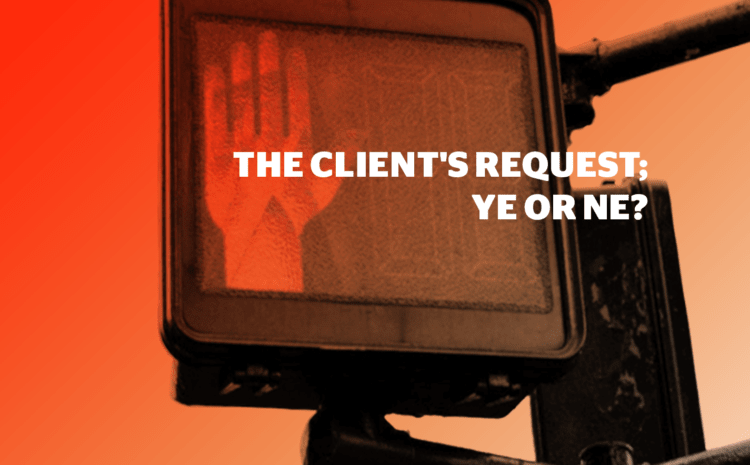 The Client’s Request; Ye or Ne?

Should you always say yes to the client?

Nope. There, I just saved you the 5 minute read.

Coming from a customer service background, When I began my job as an Account Executive, I always found it easier to go along with any of the client’s requests, I was basically used to try making them happy, don’t get me wrong, this is an essential part of the job, but the more I said yes to, the more I had on my plate and instead of getting the appreciation I wanted from the client it felt like I was being taken for granted.

When you say yes to a client it’s often because it make you feel collaborative and friendly, you feel like you’re doing your job which in turn will make the client happy that his “most of the time a not so urgent idea” is accepted, he’ll trust you as a representative of the agency and will be happy to recommend you when the time comes.

Now those were the official and professional reasons, I can honestly say that while those are true reasons, the “3ayzeen nezo2 el youm” is probably the most used one, let’s face it, do you really want to be the guy who pushed the client out of the door.

But the client came to you for a reason, in the end you are the expert even I you’re not. There’s always some space to step back and consult with others before you agree on the whims of your client.

There are some serious downsides to being the “yes man” in the relationship:

False promises: It’s easy to say yes and look for the solution later. But with all the yesses you’ve been handing out, you’ll drop the ball, and he won’t be forgiving you for that, you see you could be friends but when it comes to taking the blame there’s going to be some pointing fingers, and it’s not going to be the finger you’re used to.

Over promise: The rule of thumb is to always, always under promise and over achieve, setting the bar low from the beginning and then scoring a home run will get you on his good side.

Wasting time: Let’s be honest, if you had said no from the beginning to meaningless amendments you would’ve saved a whole lotta time to all parties.

There are a couple of observations to this

3 magical ways to say no and don’t come off as a douche:

Instead try to understand the reason behind the request, do some research, consult your team mates, read a couple of articles, watch YouTube, apparently there’s more to it than the kitty videos.

I know those are 5 ways but I was too lazy to go up and correct it.

I don’t believe that the customer is always right, because I am customer and I don’t feel that I’ve earned that and neither does the client, he gets some extra points for being who he is but in the end…….you get where I am going with this.

Inbound Marketing & why your Business Needs it

How to Run a Successful Online Promotion

Why Growth Hacking is Crucial for Your Startup’s Success

Any cookies that may not be particularly necessary for the website to function and is used specifically to collect user personal data via analytics, ads, other embedded contents are termed as non-necessary cookies. It is mandatory to procure user consent prior to running these cookies on your website.